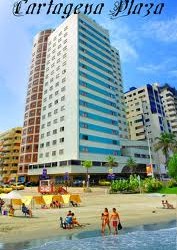 #4 of 11 hotels The Monarc.ca popularity scale (#1/15) classifies all the hotels of a single destination according to the number of grades received on 5 and the total number of reviews. in Cartagena
3.30 based on 10 reviews
Click here for detailed ratings

Melissa Cordier, Ancaster, ON
2019-04-08
Experience was just "ok". if you are looking for a resort feel this is not the place. this is a hotel with all inclusive options.
Room was very clean, we booked a dpuble room with two beds but ended up with three beds. bathroom was clean, large shower. beds and pillows werent comfortable for me. small bar fridge with a bottle of water and a safe, ironing board and iron. they do offer laundry service. we had a nice view on the 6th floor of the Old City in the distance. No balconies in this hotel!

Buffet was limited, long lines at the grill at breakfast and dinner. more of the same food each night (meat, rice, veggies and some other side) small buffet of fruit veggues, bread cheese and deli meats. there is a resraurant on site that you pay for as well.

pool and snack bar area was kept cleaned and organized. pool is small, about the side of a residental pool. 6 cabanas and about 40 loungers available, so arrive when it opens at 9am. Not much music played at all or any activities offered at the pool. Nice view of the ocean, beach, skyline

beach across the street is disgusting. its dirty and full of garbage. if you're expecting clear blue water...you wont find it there. loads of locals constantly bothering you for services. activities do happen on the beach though.

check in/out took longer then it needed to. no one speaks english which made it more difficult. most if the staff were friendly regardless

hotel entertainment was okay...they had a disco and event board available

the hotel is located in a good place of shopping, local eateries and strips. Mall is a short walk down the road. [Details]
The strong points
very clean hotel. close to amenities such as shopping, restaurants, beach and the Old City
The weak points
hotel feel. not very many employees speak good english, but they tried! buffet does not have much of a selections
0   0
Certified

It's not the Hilton,but worth the money!!

Tim Duncan, Toronto, ON
2014-03-17
Everything was well worth the money here. I have been to Havana 7 times, Varadero 3 times, Costa Rica 4 times,Domican Republic 2 times and the food here , drinks and location of this hotel all win. If you are going expecting the Hilton on this budget this is not the place for you. The hotel is a $6.00 cab ride from the old city ...great restaurants!! Awesome culture!! Fantastic trip!! [Details]
The strong points
All strong points if you go expecting Hell and you get Heaven for a decent price.
The weak points
No weak points...every trip is what YOU make it!
0   0
Certified

Nikita Parmar, Calgary, AB
2013-01-30
When I arrived at Hotel Cartagena Plaza, my initial impression of the outside of the building was that it was an older, but maintained building. It was located right in front of the beach. All you would need to do it walk across the street to get to the beach. The lobby was beautifully designed, spacious, but old looking. That didn't bother me too much, since I don't spend time in the lobby on vacation.

My room was very spacious. I was travelling solo and I got a large room with 2 queen beds. It was nice to be able to spread out my items after a hard day of shopping haha.

The floor of the bedroom was a little dirty. Not too big of a deal again, it's not as if there were bugs or anything like that, it was just dusty. I could feel it on my feet. Again, not a big deal for me since I spent minimal time in my room.

The staff at the counter were friendly. The only issue I had was one of my lights in my room burnt out about 3 days into my stay and I asked for it to be replaced. In the additional 4 days that I was there, it was never replaced. I asked twice and nothing was done about it. Also, there weren't too many staff working during the weekdays, so I found myself waiting between 10-15 minutes to speak to someone if I had a question or needed assistance. There were a handful of people that spoke English at the counter. My Spanish is pretty non-existent, but I managed to get by. All of the bell boys spoke English, so that was very helpful.

When I went to the beach, I was bombarded by women that were offering salt scrub massages, tons of beach vendors and people that would just come and talk. It was very annoying since I wanted to sit by myself and relax. There were other beaches in the city that were close by and I had been told by other visitors that I wouldn't be bothered by vendors or anyone on those beaches. I'll keep that in mind for next time.

I went on an all-inclusive deal. I found the food to be very good in the main restaurant of the hotel. There was a lot of selection. I didn't like the fact that dinner service started at 7:00pm. I usually eat at 6/6:30 and I was always hungry. It was harder to plan things in the evening when you lose that one hour. I bought snacks to tide me over every time I had dinner in the hotel restaurant.

I'm not vegetarian, so I was good to go with any type of food. There was one girl I knew there that was vegetarian and she found it a little hard, but not impossible, to eat at the hotel restaurant all the time.

The location from "The old city" (downtown) was great. It was a short cab ride which came out to about roughly $6 CAD one way. Not bad at all.

I would stay at this hotel again. The staff were friendly, location in the city was great. If I do come here again, I'll be staying away from the beach. [Details]
The strong points
Location, friendliness of staff, food in main hotel restaurant, felt safe
The weak points
Hotel beach, cleanliness of bedroom floor
0   0
Certified

Not 4 Stars by any means

Matthew Tevlin, Toronto, ON
2013-01-08
This is the least all-inclusive lowest quality hotel I have ever stayed in. The only positive is that it was clean. [Details]
The strong points
It was clean and had good internet
The weak points
It is at least 30 years old and never been renovated.
0   0
Certified

Dave Carter, Sudbury, ON
2012-03-19
If you are travelling to Cartagena, this hotel is useful as a room only.
Avoid the all inclusive food. There are many excellent restaurants within a short 5-10 minute walk. The pool on the roof was unique, and the only place where the drinks are availble.
Do not get a room on the 18th floor (beside pool). Very noisy until it shuts down at 11. The beach across the street from the hotel was passable, if you don't mind the constant (and I mean constant) beach vendors around you every minute of the day.
There is some excellent shopping within a 5-15 minute walk of the hotel. Taxis to the old city are inexpensive 5,000 pesos (about $3 one way) and it is time well spent wandering the old streets.
Safety did not seem to be an issue, as there is a noticable police presence in the area.
If you are a beach lover, I would look for another destination. If you are a lover of culture and history, then this is the place for you.
I would definitely go back to Cartagena, but would try alternate accomodations. [Details]
The strong points
Location of hotel is good. History of the city is worth exploring
The weak points
All inclusive food.
0   0
Certified

Licenia Garcia, Brampton, ON
2012-02-22
I read all those negative experiences prior to leaving for Cartagena and was a bit worried. Good thing I chose to have my own experience and it was great! Hotel was nice and clean, the food was great, lots of variety and the service was as one would expect from a 4* hotel. Experiences are what we make of them!!!! [Details]
The strong points
Very clean, nice people, excellent location, Cartagena is a beautiful city
The weak points
Everything was great. It is a hotel not a reasort, so do not expect to find many restaurants or more than one pool. Learn to say no to the locals on the beach trying to sell you their merchandise.
0   0
Certified

Dan, Toronto, ON
2012-02-10
not a 4 star - this hotel does not understand the concept of all-inclusive [Details]
The strong points
location. decent food
The weak points
bar location via elevator to the 18th floor
0   0
Certified 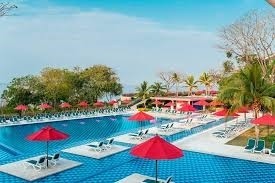 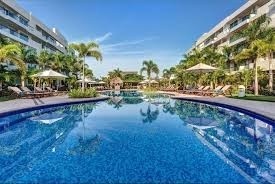